Home About Speaking Blog
The Eight Year-Old's Combat Field Manual for Surviving the Family War Zone
"Guilt or Resentment: Hmm... Which Shall I Choose Today?"

Best Words of Comfort Ever: "You're Still the Best Football Player on the Block" 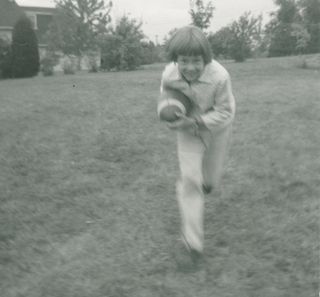 Funny, how the most off- hand comment at the time can mean so much to a person and you never even knew it. This is one of those stories, and Joey, this one's for you.

It was the spring of 1967 and we were in the 7th grade at Sacred Heart School in Swedesburg, Pennsylvania, a suburb of Philadelphia. My best friend, Mary Jo (Joey) and I had sneeked up to the choir loft during one of the mid-week masses attended by the whole grade school. Only a few select 8th grade girls were allowed up there, so of course, we had to be there.  Sister Veronica Anne asked what we were doing there. We lied and said that Sister Camilla told us we should come up there now to learn because we would be going there the following year. Of course, we told Sister Camilla that Sister Veronica Anne had said the same thing. I have no idea what anyone was supposed to be doing in the choir loft; there was no choir at these mid-week masses. We just always needed to be doing what we weren't supposed to be doing and besides, Sister Veronica Anne somehow accepted our explanation and we were allowed to stay. Our two older sisters, Kathy and Jane, were perfect Catholic girls in every way, so the nuns always extended the benefit of the doubt to Joey and me. We got away with so many broken rules, the parish priest was quoted years later as saying, "Yes, Joey and Kris ran that school." I admit I am kind of proud of that.

So, here it was, just about Communion time, and

Sister Veronica Anne suddenly realized that no one here knew how to play the next song, Holy, Holy, Holy on the organ. I had been practicing this exact song on our Wurlitzer organ at home. I honestly don't know what happened next, but somehow, from somewhere brave within me, with my little voice quaking down to my toes, I whispered, "I can play that song, Sister." She sized me up with a threatening "you better not blow this for me," look on her face, and then pointed dismisively toward the organ bench. 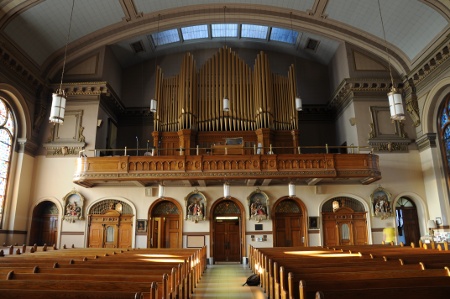 Now let me tell you, this was no living room Wurlitzer organ. This was a gigantic pipe organ in the grandest Catholic Church tradition. Just the power being turned on caused a deep, loud humming sound that could be heard across the room. There were three steps to climb in order to reach the enormous wooden bench. Sister stood next to me, my right hand poised above the keys on the upper deck, my left hand shaking above the lower keys, planning only to play the static chords.

She signaled the exact moment to begin. I began. "Holy, holy, holy, Lord God Almighty..." It started just fine. Not bad at all. And then I realized where I was and what I was doing. The pressure, the fear, my nerves, they all came flooding to the surface. My hands started shaking so violently, I couldn't control them. Pretty soon, I abandoned my left hand completely and this beautiful iconic hymn was suddenly reduced to the single finger plodding of a novice 7th grader who was now in big trouble. I glanced in the rear view mirror above the keyboard and just caught the sight of Father Sokol, standing at the front altar, looking back over his shoulder, up toward the choir loft, obviously wondering what had just happened and who was playing the organ. I never did finish the hymn. Mortified, I climbed down from the organ bench with Sister Veronica Anne staring hatred directly into my soul. I retreated to a dark corner of the choir loft, heaving sobs of humiliation. Joey was right behind me. We sat in silence for a minute. Then, she put her arm around me and simply said, "Don't worry about it. You're still the best football player on the block."

It was a miracle. In an instant, the sun began to stream through the parting dark clouds. The heavens opened up and a choir of angels began to sing the Hallelujah Chorus. I felt immediate relief as the burden of my terrible humiliation evaporated in that moment as correct perspective was restored. My best friend, - and greatest unspoken competitor while picking sides for all neighborhood games - just put my world priorities back into their rightful order, and paid me the highest compliment at the same time. I felt happy. No words of comfort have ever been as complete and instantaneous in their effect as those plain words spoken by my best friend, Joey. 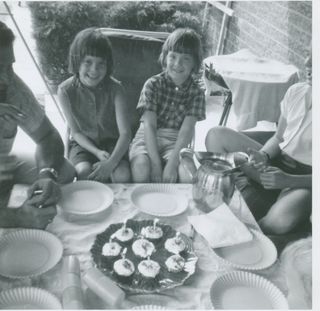 Me and Joey at my 8th Birthday Party

Years later, before going off to college, I shared this story with my mother. A few months after that, while going through some college crisis, I received flowers from my mom.  The card read simply, "To the best football player on the block.  Love, Mom." It has been an affectionate inside joke between the two of us for all these years.

I love how this story reminds me that when I am trying to think of just the right comforting words to share with a loved one or a client, it is often just the plain spoken  acknowledgements that can carry the most healing power.

I love this story! Perspective! It is always so good to remind ourselves, and to be reminded of what is truly important. You did that for me today. Thank you.

Great story. It's amazing how the simplest of words can turn our mood around in an instant.

Yes! A little perspective can go a long way!

This is a great story; it is so true how a few words can turn a whole situation around, especially when they are coming from a best friend. They somehow know what to say most of the time.

Hi Eduardo,
I know. I would love to hear other people's examples of how their best friends really came through for them. I just love the whole topic of friendships in general. Any thoughts?